Strutting at the edge of the water or rising magnificently from the waves, the bather […] represented the topos of an essential femininity which, regardless of culture and society, nestled in the immortal waters of time or in the spaces without rules of heaven. The ones who deprived the bathers of their classical grace and their timeless connotations and permanently inserted them in the social and sexual circuits of contemporary life were the Realist Gustave Courbet and Edouard Manet, the former in Les bagneuses of 1853, in which the portrayed figures clearly revealed their social class, the latter in Le déjeuner sur l’herbe of 1863, with the iconoclastic juxtaposition of female nudes and men in modern clothes. The idealized figures of traditional oil painting had already disappeared.[…]

Just as Realist painters were transforming the bather from a pre-packaged mythical figure to a historical protagonist, naturalist travelers and plein-air protagonists followed the footsteps of tourists and vacationers towards the leisure places that were flourishing along the banks of the Seine and towards the newly designed holiday resorts that were sprouting on the Italian, French and English coasts. It was there that beach and sea lovers revealed themselves to painters as modern creatures, produced by fashion and social conventions in the metropolitan centers of Europe. […]

“It is this world of packaged pleasure, that Massimo Vitali documents. His bathers have nothing to do with the idealized water-nymphs of classical mythology and traditional oil-painting […] Vitali captures the stripped and unrefined corpulence of the everyday”

Seaside holidays were initially the prerogative of the wealthy classes who found themselves strolling and wandering in fashionable clothes along the coast or among the newly built pavilions and piers, erected precisely to organize their free time in a pleasant way; soon they were also within the reach of the middle class who descended in hordes towards the sea. Having originally crystallized around grand hotels, casinos or seaside resorts, the beach became a kind of docile manipulator of crowds, whose conformed needs were at the same time created and satisfied2. The legacy of these beach resorts still pervades the Mediterranean coast and has become the pole of attraction for 19th century tourism.
With the increase in vacation packages and lowered air fares, beach holidays are now within the reach of most Europeans who travel every year to profess the cult of the sun, swim, walk around and flirt on the sand.

It is this world of packaged pleasure, that Massimo Vitali documents. His bathers have nothing to do with the idealized water-nymphs of classical mythology and traditional oil-painting or even their made-over modern equivalents, displayed on advertising billboards and in the pages of fashion magazines, the airbrushed products of extensive photographic manipulation and studio staging. Vitali captures the stripped and unrefined corpulence of the everyday. His splayed-legged bathers, inelegantly reclining on deck chairs and towels, parade the mass-produced bikinis and swimming trunks of the hyper-market, worn to reveal the puckering pleats of aging flesh, patchy suntans and voluminous bellies. In amongst the crowds, semi-naked children play ball in the shallows and fashionable topless beauties with their well-toned athletic young men, strut their stuff at the water’s edge. The informality of social interaction and apparent lack of self-consciousness of these holiday-makers divests the scene of overt sexual significance and presents a world of semi-naked bodies which is curiously de-eroticized while the distanciated view point and democratizing overall vision that Vitali assumes, decathects and banalizes the scene, connecting it to the sketchy anonymity of the early images of seaside tourism.

1. For more information on the theme of the bather in the European art history: L.Nochlin, Bathtime: Renoir, Cézanne, Daumier and the Practices of Bathing in Nineteenth-Century France, Gerson Lectures Foundation, 1991.
2. For an extremely personalized and in-depth report on the historical development of the beach: L.Lencek-G.Bosker, The Beach; The History of Paradise on Earth, London, Secker & Warbung, 1998. 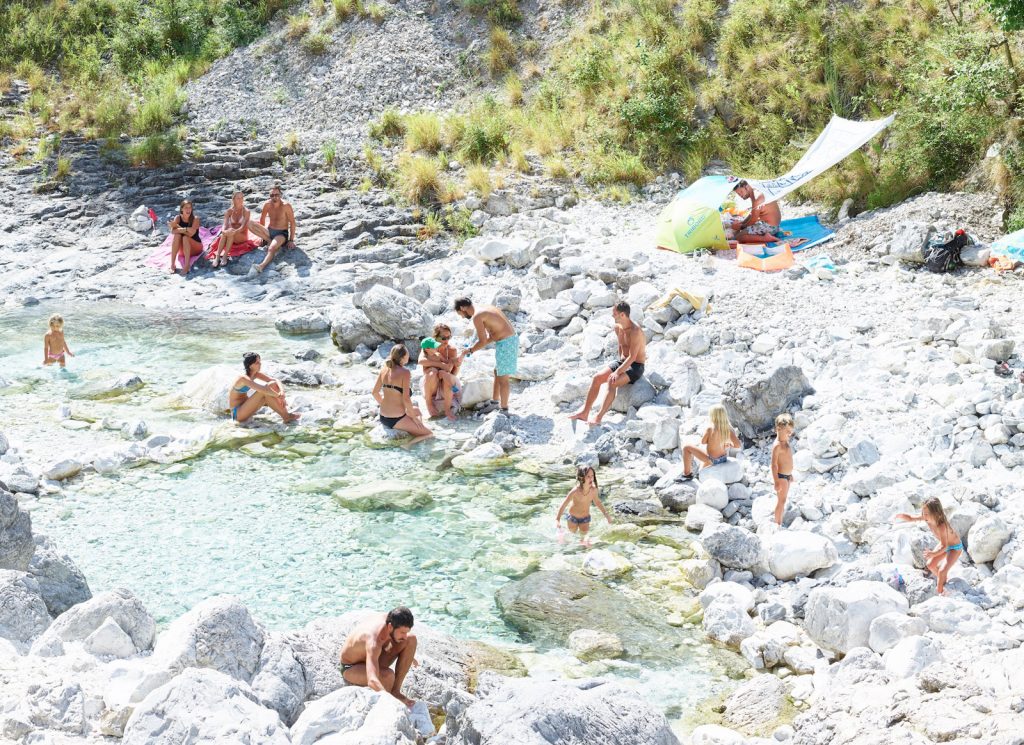 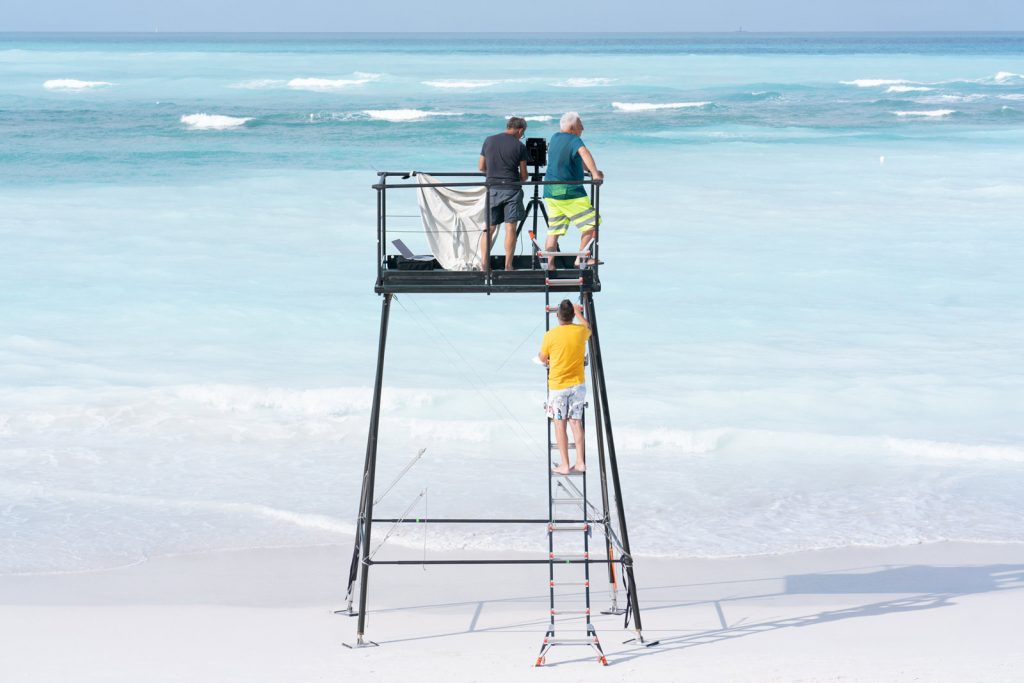 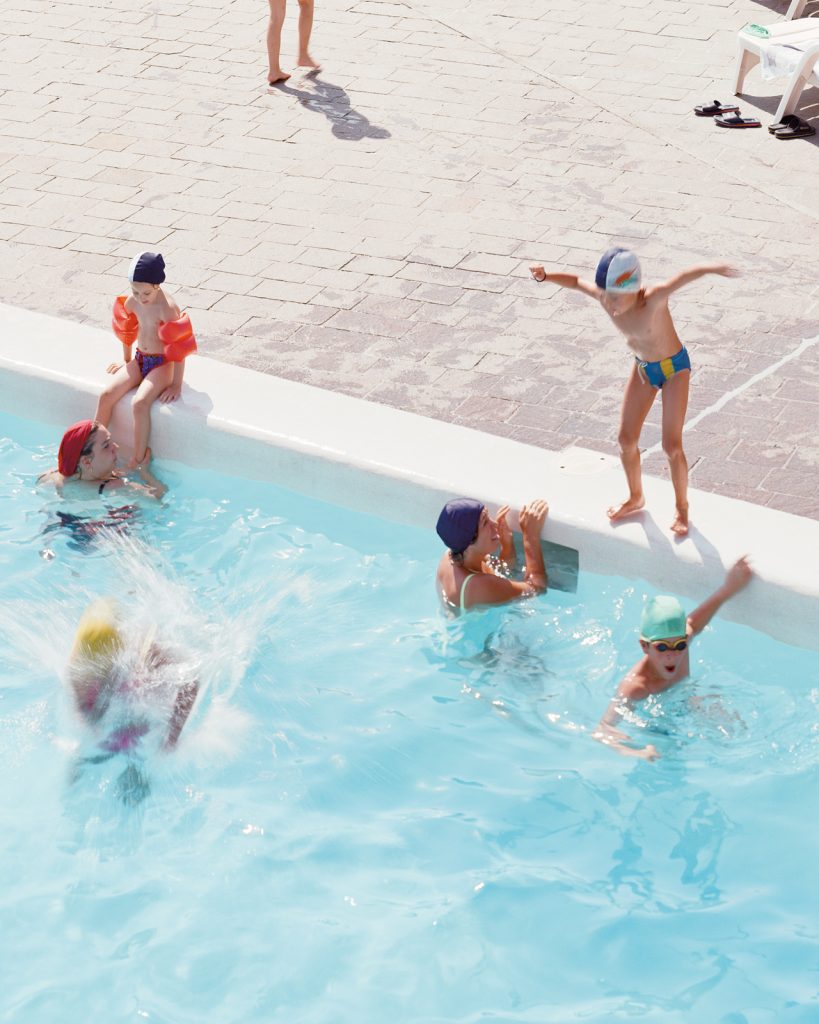 A dip in the blue 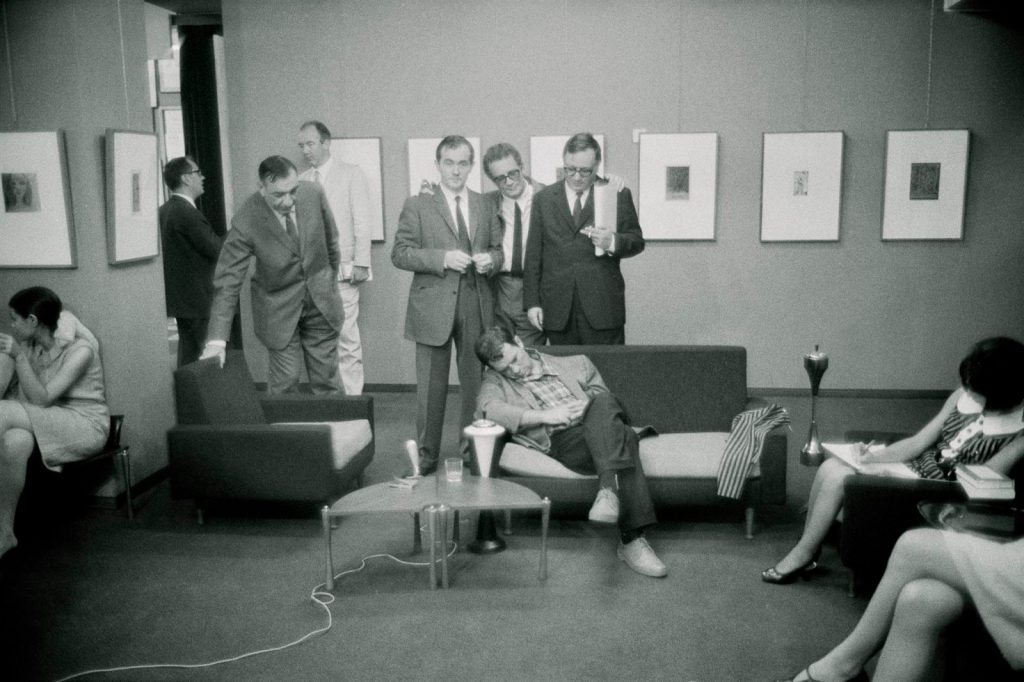 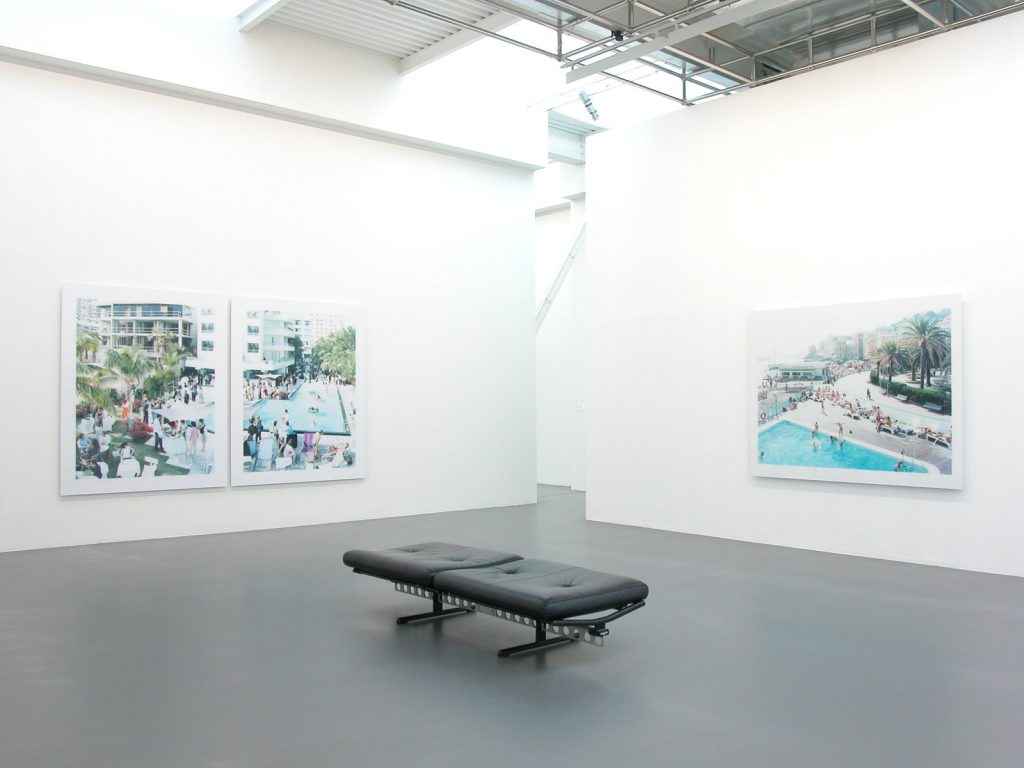 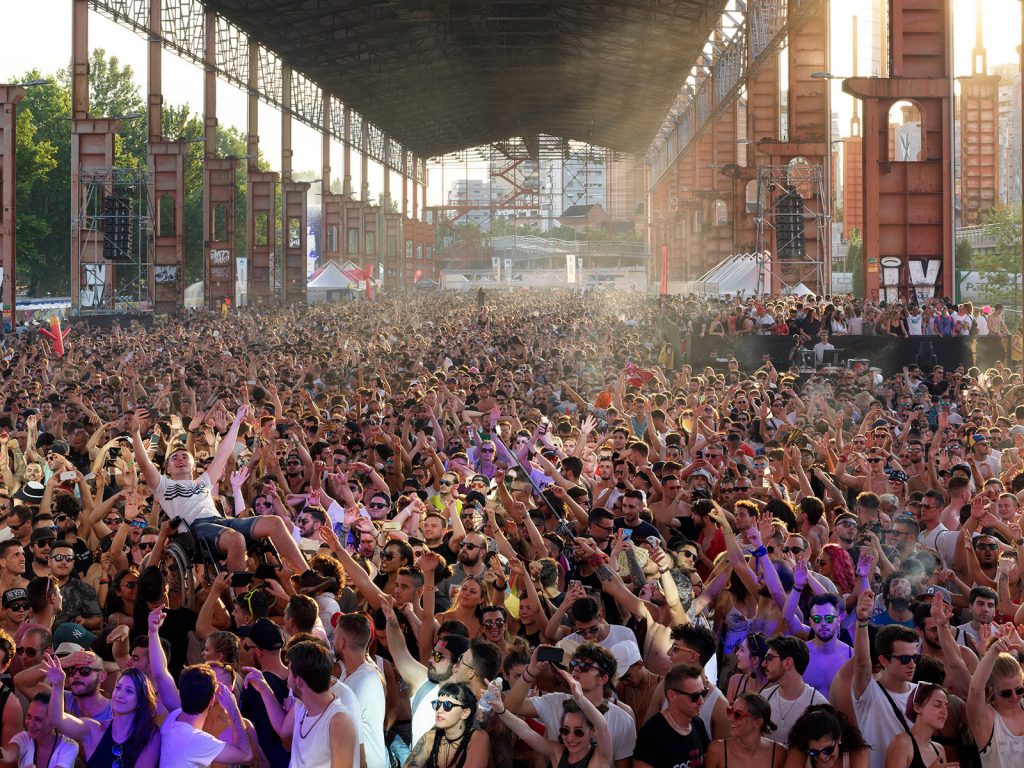 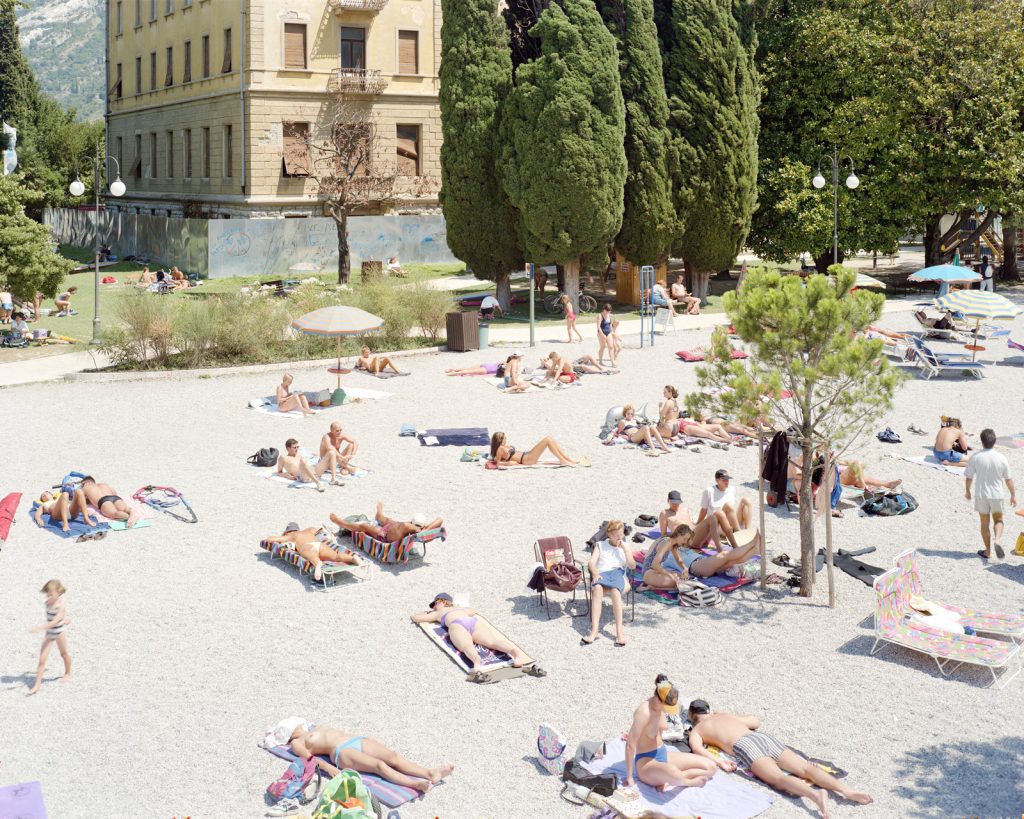 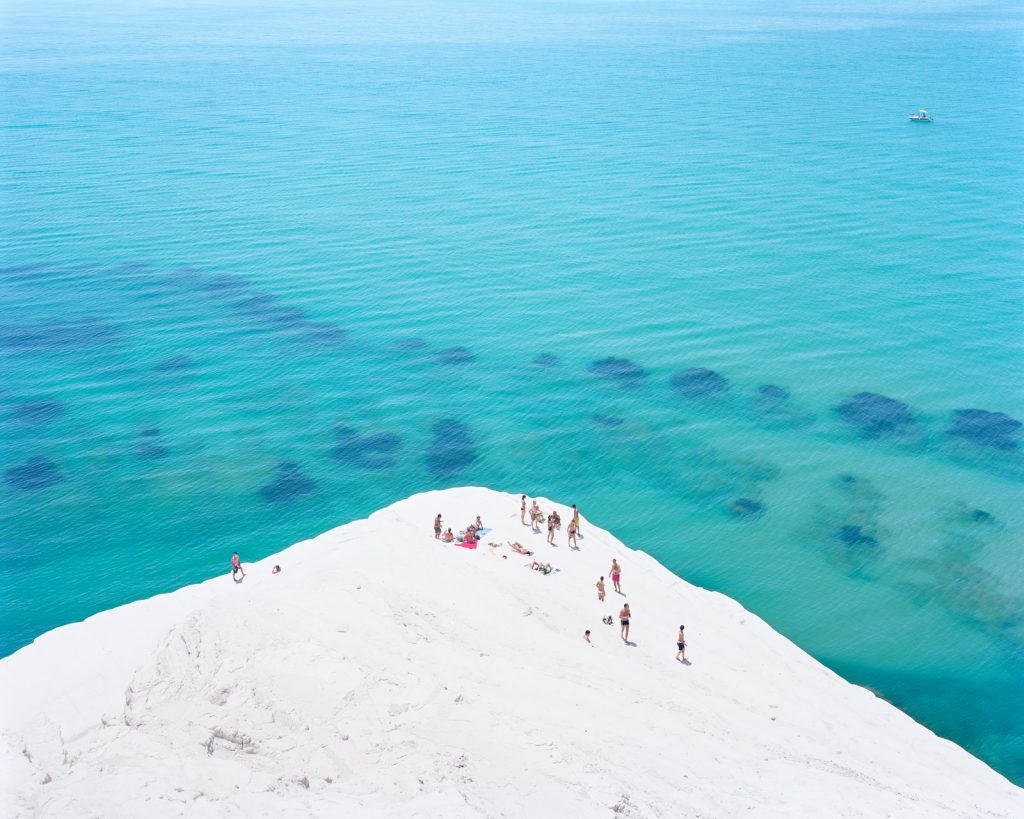